The Rolls-Royce Phantom is a wonderfully put together piece of machinery that is incredibly comfortable and exceptionally fast for its size.

The Phantom will cost a fortune to run, but buyers with the money to purchase it in the first place are unlikely to be put off because it drinks fuel and costs a fortune to insure.
The Phantom is unusual in that it is fitted with ‘coach doors’ which open towards the rear making it easier to get in and out.
The car is massive so there is a luxurious amount of space – particularly in the back which is important as that is where most owners are going to spend their time as the chauffeur takes care of the driving. 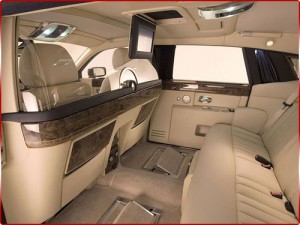 The boot is predictably massive and easily able to swallow the results of spending spree at a decent-sized high class department store.
Those buying the Phantom are likely to own big houses with large garages attached which is just as well as a huge home is needed to accommodate the dimensions of this car.
The Phantom offers the best of both worlds as it was styled in England but engineered in Germany by parent company BMW. The cabin materials and aroma are pure Rolls, but fit and finish are on a different plane than in the old hand-built days and the attention to detail is superb.
Those owners who do happen to get behind the wheel of the Phantom will immediately notice its sound ergonomics. The driver sits at Land Rover Discovery level, although rearward visibility is poor to ensure rear passengers get the required degree of privacy. The car has a simplified version of BMW’s iDrive system, a twist knob that controls all the major heating, entertainment and information functions.

The Phantom is for lottery winners or lords of the manor with money to burn and an appreciation of a class act. It meets the Rolls-Royce standard of being impossible to ignore while the interior is truly elegant – finished to the highest standards using the best materials. It is designed from the rear seat forwards as most owners are expected to be passengers. The care and attention to detail are exemplary which they should be considering the Phantom’s price-tag.
In the unlikely event of the owner getting behind the wheel it can be revealed that the driving experience is pretty special as the car corners with a neatness unknown in any previous Rolls, and the steering is accurate as well as light.
The Phantom is extremely well insulated from the world, giving amazing levels of refinement for both front and rear seat occupants.
Comfort has priority in the set-up thanks to the air-sprung suspension,
If you want a green life style though forget the Phantom as it is about as environmentally friendly as an oil rig.

Obviously the Phantom is a magnet for criminals – but Rolls-Royce have fitted every security device known to man to deter them.
The Phantom has a large range of active and passive safety features as standard. Normally, rear-hinged coach doors are outlawed but the Phantom overcomes the problem by fitting a sophisticated electronic locking unit which prevents the doors being opened into the path of a following car. 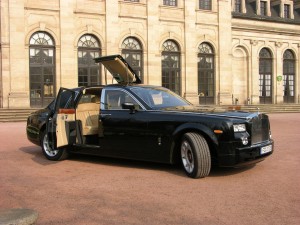 It would be far quicker to list the things the Phantom doesn’t have and the fact is no two cars are likely to leave the factory the same.
When it gets right down to it, Rolls will sell you any accessory you are willing to buy.
The audio system predictably makes a brilliant sound.

The Rolls-Royce Phantom is a spectacular piece of engineering which is as it should be for something that requires serious wealth to be able to contemplate buying.
It is far more agile than its size would suggest as the Phantom weighs in at a mammoth 2.5 tonnes. But it is actually far lighter than if built conventionally from steel as it uses an aluminium space frame that saves 300kg. Power is provided by a 453bhp, BMW-sourced, 6.8-litre V12 which is linked to a six-speed auto gearbox and ensures the Phantom packs a punch although this is a car committed to gliding about rather than burning rubber.
The materials used both inside and out are top quality and the Phantom is put together with great care and attention to detail.