With their name derived from the Aston Clinton hill climb and the last name of one of their founders, Aston Martin began in a small, West London workshop in 1914. 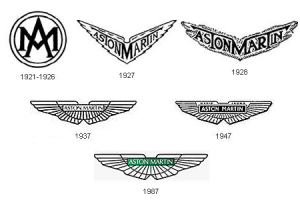 Originally Bamford & Martin, they constructed their first car in 1915 but couldn’t carry on production because of the First World War. When manufacturing resumed, they made cars to compete in the French Grand Prix and were able to set speed and endurance records at Brooklands. Unfortunately, the company bankrupted by 1924 and was sold.

For years the company struggled financially and had numerous investors come and go. Even though they had great racing success, the company decided to focus on road cars, still struggling to survive.

In 1993, Ford bought the auto-maker and placed it in their Premier Automotive Group. With new capital invested into the company, production was increased and new engine models were introduced. A new factory was built for the brand, new models were introduced, they continue to market their luxury and style, and by 2005, Aston Martin had returned to racing.

With all the positive changes that have taken place, the future of the brand is currently uncertain. Ford has found themselves cash strapped and have authorized the sale of the division. Various companies, many with no automotive experience, are bidding and only time will tell who will purchase Aston Martin and what direction they will take it.